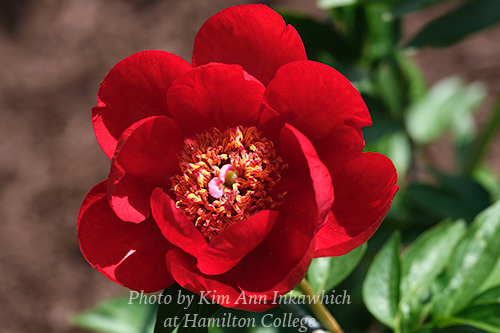 There has been a lot of controversy about the authenticity of this plant, mostly due to its rarity and Silvia Saunder’ note in 1974 in Paeonia, the newsletter circulated among hybridizers, that it had died out in her garden and was therefore extinct.  It is not the only Saunders cultivar distributed by the Saunders Nursery that they later discarded or lost in their nursery but was already growing somewhere else.

As a followup to Silvia’s comments, Peggy and Keith Goldsmith wrote in a letter dated January 5, 1975 to Chris Laning and Silvia Saunders, printed in a subsequent issue of Paeonia, the following:

“I think we’ve had ‘Red Lacquer’ for the 22 years we’ve grown peonies. It was shown in the old Peony Society Handbook as lactiflora X lobata.  We could have gotten it from you, Silvia, sometime after our initial plunge, but I think it was among the stock we bought from Roy and Gladys Leighton in 1952 which they had bought from your father.  It grows slowly for us too and we’ve never been able to sell more than one or two a year if that. It is perhaps my favorite red peony (with ‘Alexander Woollcott’ running a close second) so I’ve been careful to always keep at least one small division.

When it first opens, its stigmas and anthers are pale pink and lacquered together – rare and lovely. As it ages the stamens separate and the anthers get the fuzzy “chenille” look you described.  Its petals have a heavy texture, are quite wide, smoothly rounded with a slight cup opening almost flat before they fall. Its color is a rich, satiny Chinese red, darker than ‘Scarlet Tanager’ with no blue undertone. Its color does not fade. Leaves are clean, dark green, nicely cut, crisp, and it has sturdy stems on a rounded plant.  All in all an elegant plant and flower if only it multiplied faster.  I’ll check for pollen next spring.”

When the Goldsmith Nursery closed, the plants were acquired by Don Smetana of A & D Nursery who sold a division of ‘Red Lacquer’ to Swenson Gardens, likely in about 2010.  Swenson offered a few divisions for sale in 2019 which is when Hamilton College acquired their plant (photographed by Kim Ann Inkawhich in 2021).  Keith Swenson reported to me at the time that he had used it in hybridizing but I do not know if it was as the female or male parent.

In 2021 when Peggy and Keith Goldsmith’s son was cleaning out her belongings he sent me some of the peony material.  Included was an undated Goldsmith Nursery catalogue in which ‘Red Lacquer’ was listed for sale at $15.  (Dream about that!) I also have read Silvia Saunders’ notebook in which she wrote:

“RED LACQUER 14550 or 15550 This and MOONRISE are the only F-2s, so it is odd that RED LACQUER is sterile and MOONRISE so fertile. Chenille stamens. All remaining dug for Dr. Reath October 1967.” Introduced in the 1950-51 Saunders Catalog with this description: “Scarlet with variegated center.”

I am quite certain this is the correct plant and hope to add it to my own collection someday. 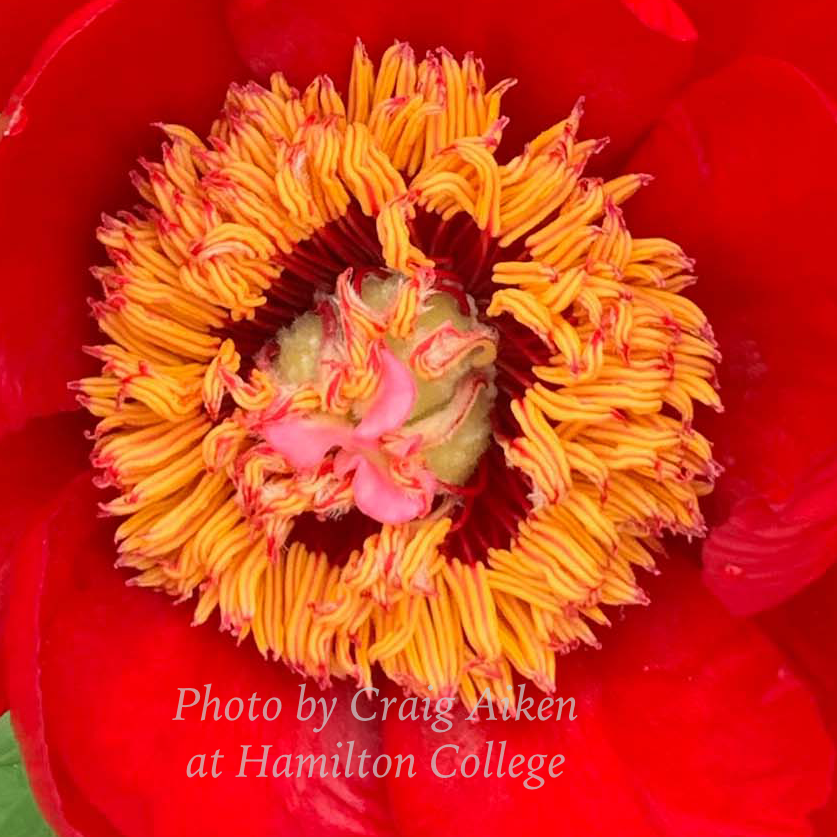