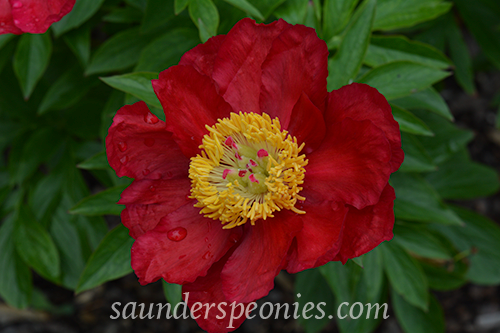 Several vendors comment on the almost chartreuse foliage as the plant emerges in the spring.  It turns to a light green. The flowers are fuller than several of the other Saunders “reds” coming from similar crosses of lactiflora X officinalis such as ‘Bordeaux’, ‘Defender’, and ‘Liberator’ and so may be more appealing to many.  Certainly it was a “hit” when it was first introduced, appearing in the Court of Honor at the 1941 APS convention show held in Syracuse, NY.

The lower photo was taken in a friend’s garden.