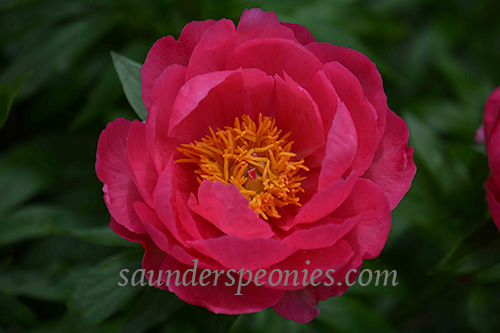 This peony was named for Julia Grant Dietz (1916 -2014), a great granddaughter of Ulysses S. Grant and granddaughter of Elihu Root. (Her parents were Edith Root Grant and Ulysses S. Grant III.) In addition to her connection to Hamilton College through her mother and maternal grandparents, she worked briefly for the college following her graduation from Bryn Mawr in 1938.  I recently learned from Julia Grant’s son that the peony was named for her on the occasion of her 16th birthday.  Interestingly, according to Saunders’ notebook, he named a lactiflora peony ‘Edith Grant’ but it was apparently never registered or introduced although he attempted at least one cross with it.